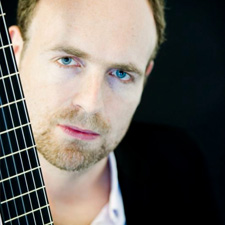 Stefan Gerritsen is an established artist in the Netherlands. He was awarded various times in international music competitions, both as a soloist as with Verso: the duo he forms with Panflutist Matthijs Koene.

In 2006 he won second prize in the international guitar competition of Zwolle, In 2006 Verso was Topwinner of the IBla Grand Prize. They received the highest mark of the jury (9.5). They were also winner of the “Vriendenkrans” and Concertgebouwprijs (Amsterdam 2003) and Comradio Contempory music prize (Barcelona 2003).

As a soloist with orchestra he performed the guitar concertos of Villa-Lobos, Vivaldi and Tedesco.

Besides his solo engagements he has worked together with renowned ensembles for contemporary music, such as the Nieuw Ensemble and Scala. He also regularly performs with classical singers.

Stefan Gerritsen played in many prestigious venues, like the Carnegie hall in New York and the Concertgebouw in Amsterdam. He performed in festivals in South Africa, Greece, California and Germany.

In 2011 Soundboard magazine wrote: Guitarist Gerritsen is virtuosic and fluent in all of the techniques of modern guitar playing.

Many composers wrote pieces for him, both for his duo and chamber-music groups, and more and more for the 31-toneguitar. Recently he is involved in establishing new repertoire for guitar and choir. Composers as Roderik de Man and Gerard Beljon dedicated their compositions to this project.

Besides the classical guitar Mr. Gerritsen also plays on 31-tone guitar, which is very close to mean-tone tuning and for this reason very suitable for music written by composers such as Dowland, Sweelinck and Weiss. He has been invited to record a disc on this instrument for Turtle records. Leading Dutch newspaper wrote in 2016: Stefan Gerritsen is a “ grandioze gitarist”